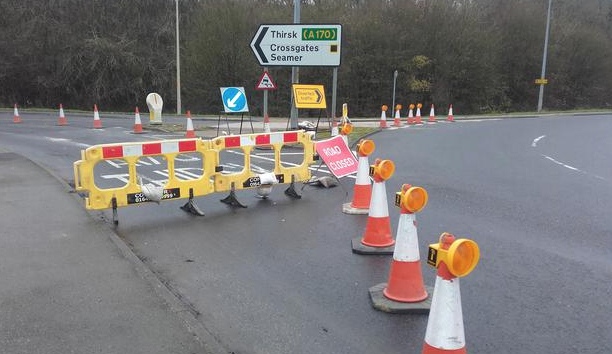 “The work crews feel safer on site thanks to the Safelane system, as they know that there are some drivers who just don’t care!”

Ringway Infrastructure Services have deployed the Intellicone® Safelane equipment to help improve their safety protocols during the resurfacing works on the B 1261, Crossgates to Musham Bank. The works were carried out during the daytime on a busy B-road that cuts through a residential area.

As such, Intellicone® enabled full road closures were required to prevent access from the A64 and from the housing estate. Access to site was through a manned chicane, where an R-Series PSA was placed, which included a CCTV camera, both to be activated by the operatives Panic Alarm.

If the full closures or the access points were breached by an errant vehicle, the strategically placed Crew Alarms would be instantly activated allowing the works crews to seek safety.

’When the Alarm goes off, it really makes you look around. I can even hear through my ear defenders.”- Coneworx TM

“I’m keen on it, it has done just what we wanted it to do”. – Area Agent, Ringway Infrastructure Services

‘’It’s been no bother, even in the high winds’’.- Coneworx TM

‘’We had to changes plans slightly and the kit adapted to suit’’.- Coneworx TM 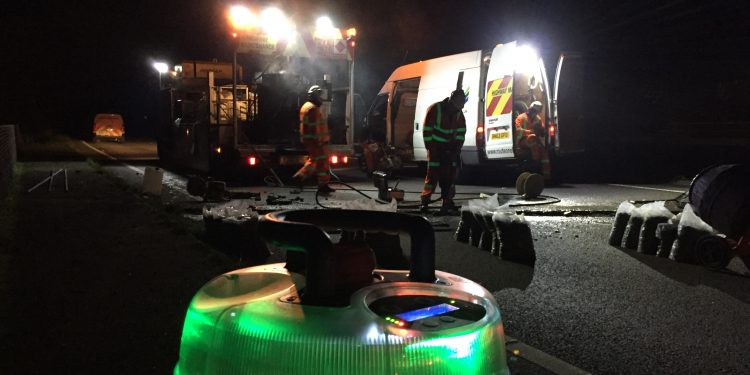 “This highlights the importance of the Intellicone system having been deployed correctly, and may just be on this occasion the system that sent all the contractors home safely to their families.”

Aone+ used the Safelane system to close around 5 kilometres of the A14 between junction 7 and junction 3 westbound. The closure was installed for resurfacing, white lining and stud replacement.  The equipment to be installed consisted of 1 Checkpoint (Orange Unit) to be moved down the site, dictated by the site manager as the site location moved every night. The access points (2 Red Units) were located at junction 7 entry slip and also a farm access as well as 3 yellow units,  which were used for side road-blocks. We also had on site 3 blue contractor units, all units were deployed overnight.

“We received a phone call from the TMF advising that two stray vehicles had entered the site. The first vehicle had pulled up at the main gate and said he needed to get to the hospital at junction 6, when they got close to junction 6 he sped off before coming to a halt at the check point and  was then removed from site. The second vehicle ran the access point triggering the Intellicone system and sped down the closure. When he got to the check point he mounted the grass and carried on towards the workers, as this happened the Operative on the checkpoint triggered his panic alarm, thus setting of the contractors Intellicone Alarm alerting the workforce to the oncoming danger”

“The stray vehicle came up against the checkpoint that was added to the design yesterday and installed last night. Happy days, accident averted!”. – IDT Manager Area 7

“We had some training on the system and it was easy to work. We only had to switch the unit on and press deploy’’. – TM Operative Area 7

“Using Safelane reduced the number of TM lads on site. Also as there was a lot of work going on, it reduced the plant movements creating a safer site”. – IDT Manager Area 7

‘The system was simple to understand easy to set up’’.- TM Operative Area 7 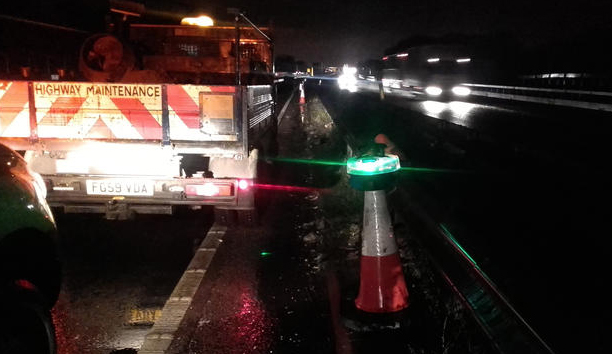 “Thanks to the Safelane system, the Crews had just enough time to turn around and see the truck speeding towards them. As they safely moved out of the way, the truck smashed through the second ‘holding barrier’ sending the plastic barriers, cones and signs towards the Crews”

An Airlock entry system had been placed on the M25, junction 30 slip road onto the A13 by Skanska Balfour Beatty . To enhance the Crews safety, the Intellicone Safelane Panic Alarm/ Gatemen system had been deployed. The work crews who were resurfacing the highway were only 1/2 km further down the road. A few hours into the shift, the closure was breached by a white Bedford truck driver.

The Gateman immediately triggered his Panic Alarm, simultaneously setting off the Blue Crew Alarm, alerting them to move to safety. As the rogue driver saw the mass of flashing beacons in front of him, he sped up and forced his way through the holding point barrier, through the remainder of the roadworks and off site. All with the blatant disregard for the workforce.
‘’Without Safelane, who knows what would have happened with regards to injuries or even fatalities’’.-Skanska TM
‘’It ‘s really good, especially how it protects the work crews’’ -TM Operative
‘’It’s a good system, I really like the way the Panic Button works’’. – TM Operative
“Safelane has already proved its worth on two separate occasions now’’.- Skanska TM 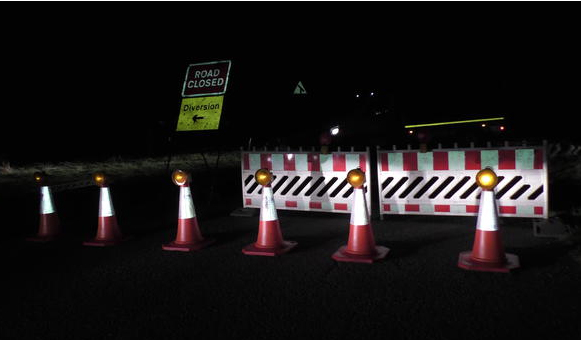 “A full closure point was set up on the Pury Lane junction with the A5. At approximately 23:30 a motorist stopped at the closure, got out of his vehicle and started to move cones. As soon as the first cone was moved the alarm sounded, the driver then quickly go back into hist vehicle and dissapeared back down the road he had come from”

The Safelane system was used to close 10 miles of the A5 between Towcester Racecourse and Old Stratford roundabout.  The closure required 2 checkpoints with airlocks (Orange Alarms), 2 works access points (Red Alarms) and 15 full closure points (Yelllow Alarms and Intellicone lamps). In additon there were 5 Blue Alarms for the workforce operating inside the closure.

When the member of the public attempted to gain access via a full closure point and was dettered by the Yellow Alarm, this also alerted the Traffic Management Operatives situated at the Checkpoint (Orange Alarm) with CCTV and Panic Alarm). If the member of the public would have proceeded towards the checkpoint and posed a threat to the workforce the Traffic Management Operatives manning the checkpoint could have sounded the Blue Alarms of the workforce. In this case the incursion was contained and there was no need to alert them and halt work unecessarily.

“The works involved would normally require using around 40 Traffic Management Operatives but using Safelane reduce this by a 1/3 giving a significant saving to the scheme”.-  IDT Manager Area 7

“Installing a Yellow Alarm removed us from the block and any confrontation with members of the public”.-      TM Operative Area 7

“The Site Manager had briefed us to move to a designated position of safety if the Blue Alarm was activated”.-  DBI White Lining Crew

“Once we were told how to use the system it was easy to install and understand how it worked”.-  TM Operative Area 7