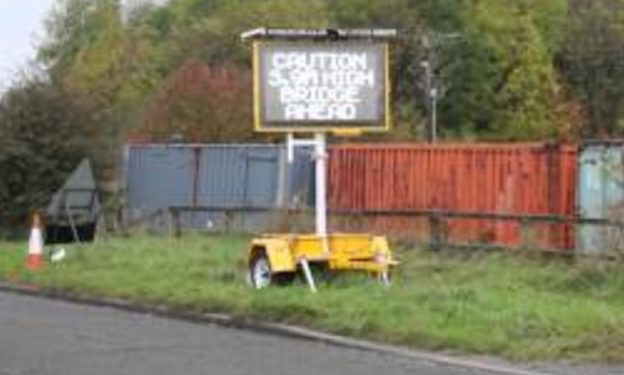 One element of the bmJV’s ‘smart motorway’ project involves the suspension of scaffolding beneath a bridge. The road remains periodically open to road-users, and therefore personnel operating from the scaffolding require protection from errant oncoming high-sided vehicles. Signs in advance of the bridge direct high-sided vehicles away from the structure. An Intellicone Sentry Beam detects overheight vehicles, activating a message on MVIS’ VMS-A variable message sign, alerting drivers to their breach and enabling them to turn round and find an alternative route. Simultaneously, an audible Intellicone Portable Site Alarm on the scaffolding warns workers of the breach, allowing them sufficient time to reach a position of safety. While the MVIS/Intellicone temporary detection system was originally designed to protect workers from vehicles in ground-based worksites, the customer identified its potential to protect bridge personnel from high-sided vehicles during its smart motorway project.

Stores manager from bmJV, Chris Hunter, who commissioned the system in September, said, “Historically, BAM and Morgan Sindall have warned drivers of overhead obstructions via goalposts or ‘hangman’ and clatterboard constructions. Neither were as effective as the MVIS/Intellicone solution at halting errant high-sided vehicles, and neither simultaneously alerted overhead personnel of safety breaches. The new solution has quickly proved its worth; within the first week, there were three breaches, all of which were quickly remedied, as the drivers were instantly alerted and able to turn around and find an alternative route. On behalf of the MVIS and HRS partnership, MVIS managing director, Pat Musgrave, commented, “We are pleased that our new temporary overheight detection solution has been so quickly embraced by the transport management market, and that it is already demonstrating its ability to promote worker safety.”